Welcome to Prue’s Place and our Tea Time Stories where we daydream and visualize.

This story is from an article written by CNN about David Seidler, who won an Oscar for best original screenplay for “The King’s Speech,” He was a stutterer just like King George VI, whose battle with the speech disorder is portrayed in the film.

What you might not know is that Seidler, 73, suffered from cancer, just like the King did. But unlike his majesty, Seidler survived the cancer, and he says he did so because he used the same vivid imagination he employed to write his award-winning script.

Seidler says he visualized his cancer away.

“I know it sounds awfully Southern California and woo-woo,” he admits when he describes the visualization techniques he used when his bladder cancer was diagnosed nearly six years ago. “But that’s what happened.”

Seidler says, when he found out his cancer had returned, he visualized a “lovely, clean healthy bladder” for two weeks, and the cancer disappeared. He’s been cancer-free for more than five years.

Whether you can imagine away cancer, or any other disease, has been hotly debated for years.

One camp of doctors will tell you that they’ve seen patients do it, and that a whole host of studies supports the mind-body connection. Other doctors, just as well-respected, will tell you the notion is preposterous, and there’s not a single study to prove it really works.

Seidler isn’t concerned about studies. He says all he knows is that for him, visualization worked.

“When I was first diagnosed in 2005, I was rather upset, of course,” Seidler says in a telephone interview from his home in Malibu, California. “After three to four days of producing a lot of mucus and salty tears, I knew prolonged grief was bad for the autoimmune system, and the autoimmune system was the only buddy I had in fighting cancer.”

Seidler said that’s when he decided to sit down and write the screenplay for “The King’s Speech,” which had been simmering in his brain for many years. “I thought, if I throw myself into the creative process, I can’t be sitting around feeling sorry for myself,” he says.

After consulting with California urologist Dr. Dino DeConcini, Seidler decided not to have chemotherapy or have all or part of his bladder removed, common treatments for bladder cancer. Instead, he opted for surgery to remove just the cancer itself, and he took supplements meant to enhance his immune system.

“For years, whenever I walked down the stairs I rattled like a pair of maracas, I had so many pills in me,” he says.

Despite his best efforts, the cancer came back within months. Seidler was forced to rethink his decision not to have chemotherapy or bladder surgery.

As his doctor booked an appointment for surgery two weeks later, Seidler commiserated with his soon-to-be-ex-wife, and it was a comment from her that gave him the idea to try to visualize his cancer disappearing. “She said, ‘Well, what happens if in two weeks they go in and there’s no cancer?’ ” he remembers. “I thought to myself that’s the dumbest thing I’ve ever heard. This woman’s in total denial.”

But later, reflecting upon her comments, Seidler thought perhaps she might be on to something — perhaps it would be possible for his cancer to just disappear while he waited for surgery. Figuring he had nothing to lose, for the next two weeks he imagined a clean bladder. “I spent hours visualizing a nice, cream-colored unblemished bladder lining, and then I went in for the operation, and a week later the doctor called me and his voice was very strange,” Seidler remembers. He said, “I don’t know how to explain it, but there’s no cancer there.” He says the doctor was so confounded he sent the tissue from the presurgical biopsy to four different labs, and all confirmed they were cancerous.

Seidler says the doctor couldn’t explain how it had happened. But Seidler could.

He says he believes the supplements and visualizations were behind what his doctor called a “spontaneous remission” — plus a change in his way of thinking. He stopped feeling sorry for himself because of his cancer and his impending divorce.

“I was very grief-stricken,” he remembers. “It was a 30-year marriage, and in my grief, I could tell I was getting sicker. I decided to just change my head around.”

“The mind has the power to heal”

While Seidler says he knows his unorthodox recovery techniques sound “woo-woo” to some ears, they sound “like science” to Dr. Christiane Northrup, a best-selling author who’s written extensively on the mind-body connection.

“This doesn’t sound woo-woo to me,” she says. “The mind has the power to heal.”

“She said, by moving himself from fear and abject terror into action, Seidler changed his body’s chemistry. Fear increases cortisol and epinephrine in the body, which over time lowers immunity,”

High levels of the two stress hormones lead to cellular inflammation, which is the way cancer begins, Northrup says. Taking action, as Seidler eventually did, decreases the hormones.

“Hope is actually a biochemical reaction in the body,” she says.

“When an athlete visualizes success, their body really is experiencing success. When you imagine something, your body really feels like it’s happening,” says Siegel, a retired surgeon from Yale Medical School.

Start daydreaming and visualizing your magnificent self well.

I’m honored to have Bernie’s support for my work and programs at Prue’s Place.

To think I found Bernie’s meditation tapes in the late 80’s at the Perth, Australia library and listened to his meditations every single day. Who would have thought that 30 years later I’d still be here, let alone listening to Bernie delivering his meditation live in Connecticut, USA? I shed a few tears that night of absolute joy and gratitude for my amazing life. As Bernie says, “there are no co-incidences.”

Make sure you order Bernie’s book, Love, Medicine and Miracles. It helped me save my life and is my favorite book of all time. 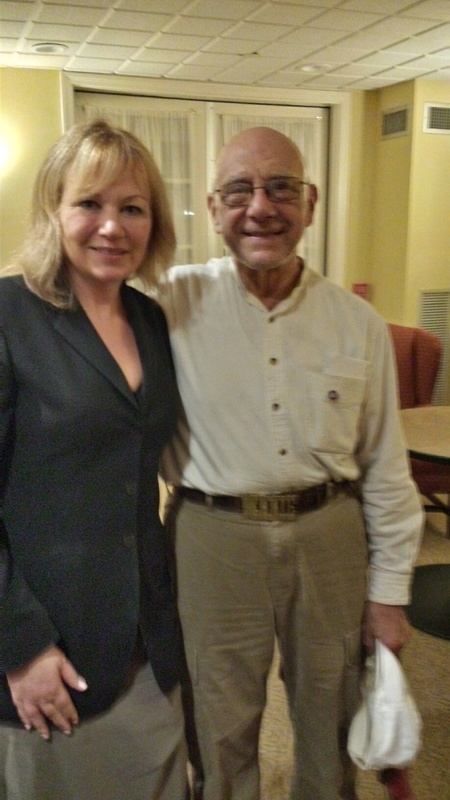 Here is Bernie and me in Connecticut when I visited and told my story to his ECAPS group.

Love you and always remember to daydream! Prue’s quote of the day: “Visualization is daydreaming with a purpose. Become a child again and get daydreaming.”

I was a big daydreamer when I was a child. My Mother would catch me daydreaming and say, “You will never amount to anything daydreaming your life away, Prue.” How little we knew back then about the power of the mind and visualization!

Cancer Self-Care: How to Quit Sugar Once and For All ...

Cancer Self-Care: How to Quit Sugar Once and For All - Prudence Sinclair

Cancer Self-Care: How to Quit Sugar Once and For All - Natural, mindful techniques for a better life with Prudence Sinclair - Lifestyle and wellness.
View on Facebook
·Share

Everyone has a gift.

I think life is about exploring your purpose and sharing your gifts to offer a positive impact in as many people’s lives as you can.

Whether it’s through painting, writing, playing music, dancing, teaching, cooking, or any number of things, your unique gifts add color, texture, flavor, and emotion to everyone around you.

All gifts are precious and valuable. ...

If you haven't set aside some time to reflect and meditate on mindfulness, this is your call to do so!
Even just a few minutes can help soothe your troubled mind. ...

Yes with one of yours ! Thanks for sharing ❤️

Meditation is one of the best ways to stop the effects of stress in your life and body. Just 10 minutes a day of mindful meditation can keep you calm and centered. I found that mediation put me in contact with my own soul and my own power source.

So many of us feel powerless on a daily basis, let alone after being diagnosed with something that seems somehow more powerful than us.
By quieting our minds from all negative thoughts and distractions, we can connect to our real, powerful selves. ...

Expect to Get Better

There are countless studies now that show the placebo effect is real. When people expect to get better they get better, even when they have only been given a sugar pill.
That is the power of the mind.

Start expecting to get better. Just start expecting good things in general. Expect to find a parking spot. Expect your kids to act a little nicer. Expect for your favorite store to have a big sale. Cancer? How heavy is your sack of potatoes?

Cancer? How heavy is your sack of potatoes?
SSL Certificate